Waterloo Uncovered is a registered UK charity that combines a world-class archaeology project on the battlefield of Waterloo with a support program for veterans and the military community. Working in partnership with some of Europe’s top universities, and through the unique perspective of a team comprised of archaeologists, veterans, and serving soldiers, Waterloo Uncovered aims to understand war and its impact on people — and to educate the public about it. 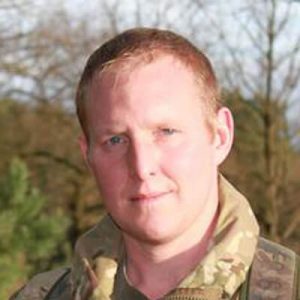 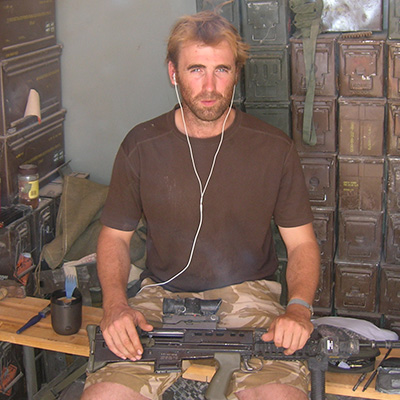 Founders Mark Evans and Charlie Foinette have a shared history. They studied archaeology together at University College London before joining the army. Both chose the Coldstream Guards, the British regiment that played a vital role in the allied victory at Waterloo and continues to see active service across the world today. In their military careers they led men in combat, saw war up close and personal, and felt its impact first hand – on the battlefield and at home.

In 2010, returning from Afghanistan, Mark was diagnosed with Post Traumatic Stress Disorder (PTSD) and his friend Charlie was on hand to help. It was Charlie’s powers of persuasion – “If you haven’t seen a Doctor by Monday I’ll bloody drag you there myself” – that set Mark on the way to recovery. It wasn’t quick and, almost four years, later when the MoD began a project to support veterans through archaeology, Charlie thought Mark would be an ideal candidate. They were both amazed by what they discovered – archaeology could help veterans recover and support their transition into civilian life.

This revelation got the friends thinking. Inspired by their shared past and the approaching bicentenary of the Battle of Waterloo, the notion struck them of combining the worlds they knew so well to create an entirely new kind of social enterprise – a bold new venture to involve serving personnel and veterans in unearthing the secrets of the world’s most famous land battle – Waterloo Uncovered. 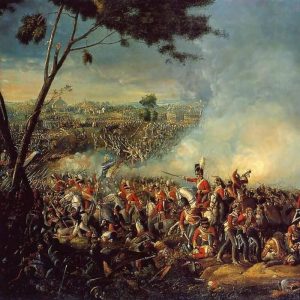 As they began to plan Charlie and Mark were amazed to find how little archaeology had previously been carried out at the battlefield. It was incredible: as Charlie said, “like knowing where Pompeii was buried, but never lifting a trowel to excavate it.”

Eyewitness accounts are abundant but recounted through the fog of the battlefield – often some time after the event – they can be biased, patchy and confusing. Somewhere between the written record and the physical evidence provided by archaeology lies the truth about what happened, and what it might have been like for a soldier to fight and die there.

Even more shocking was that 200 years after the battle the archaeology was almost gone – looted by metal detectors, disturbed by modern farming and eroded daily by the natural environment. What was left needed to be recorded now, or risk being lost for ever. 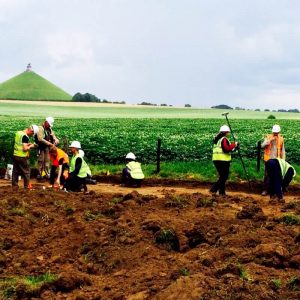 Charlie and Mark acted fast and sought the help of some of Europe’s top archaeologists and historians who readily joined the project. Universities, companies, governments, organisations and individuals all jumped on board, seizing the chance to be a part of such an ambitious plan.

So, armed with the best minds and latest technology (geophysics, smartphones, laptops, augmented reality, social media) they developed a plan: an international collaboration between the military, veterans and archaeologists to produce a world-class archaeological project.

While each team member has their own motivations there is a common thread that binds them together: a desire to work alongside members of the modern military – themselves scarred by war – in the painstaking task of piecing together this extraordinary moment in history. To be a part of a project that is truly groundbreaking. 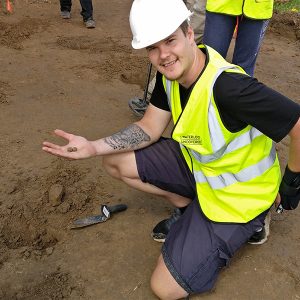 Veteran Sean Douglas, finding his first musketballs on the dig.

The military community is at the heart of Waterloo Uncovered’s DNA, and military participants bring their unique perspective, skills, and experience to help the archaeology. In return, they get to learn new skills, have new experiences and support in the issues they are facing (recovery, transition, welfare, and more).

Archaeology has been proven to help recovery from injury. A multifaceted discipline, it offers opportunities to everyone no matter their ability or injury. In particular, it is very helpful to those who suffer or suffered from PTSD. The work not only provides interest and focus but is also meditative. Its outdoors and team based nature is particularly appealing to soldiers, and the chance to do work that will be appreciated and seen by the public makes it even more rewarding.

What is more, archaeology offers a real vocational experience; a number of those from the excavations have carried on with archaeology or have been inspired (back) into education.
All who participate achieve something and play their part in uncovering some new and unique history.

Since the project began in 2015, Waterloo Uncovered has grown a lot. With over 2200 finds in just five weeks of excavation (over two years), we are learning more than ever before on the battle of Waterloo, transforming our understanding of it, and the lives of those who come on our excavations.

We’ve begun our work at Hougoumont Farm but there’s an entire battlefield still out there waiting to be excavated before it’s too late and the archaeology is lost forever. The more of the battlefield we explore the more we will uncover, and the longer the project runs, the more soldiers and veterans we will be able to help.

Please help us carry on our work — every bit makes a difference, and our donate page has all the information you need to donate in whatever way is easiest for you. We’re also happy with donations in kind: if you have a bit of kit (from a trowel to a JCB digger) you can lend or give us we’d be only too happy to hear from you. If you happen to own an airline and want to fly us to and from Belgium, please don’t hesitate to pick up the phone!

We’re looking forward to hearing from you!