A Battle is Like a Ball – Archaeology and Waterloo

It is only relatively recently that archaeology – which simply put is the study of the human past through the analysis of its physical remains – has come to be applied to battlefields. Before then they were exclusively the territory of the military historian, who relied on various written sources, no matter how unreliable they might be, to work out what happened. 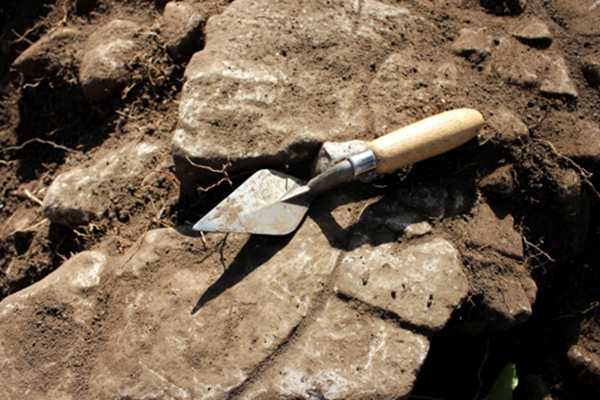 It was Wellington himself who commented in relation to Waterloo: “A battle is very much like a ball (dance)”. What he was saying was that everyone in a battle would have a unique experience of it and remember it differently; for one thing, most soldiers would have very little idea what was happening even just a few feet away from them.

Over the past twenty or so years however, the use of various archaeological techniques has demonstrated that even though pre-twentieth century battles lasted only for a short time, Waterloo being fought over the course of a day, they leave tell-tale traces in the ground.

And it is these traces, rather than words in books, from which archaeologists, a bit like detectives on a crime scene, draw most of their information. Unlike words however, the objects themselves are perhaps more reliable witnesses than the writers of the words, as they are not biased or inhibited by a fading memory. This is not to say that history is bunk, just that it can most definitely be improved upon.

Most of these traces take the form of the many metal objects discharged or dropped during a battle. At Waterloo the vast majority of these artefacts are likely to be musket balls, which over the course of the day were fired in their many hundreds of thousands. However, in the days before the introduction of trench warfare in the mid-nineteenth century, battles did not leave much in the way of physical traces on the landscape, aside that is from the graves dug for the dead in the days following.
At Waterloo though, this was not the case as rather than being fought over open fields alone, the battle also took in buildings, including the chateau complex at Hougoumont, the farm at La Haye Sainte and the village of Plancenoit, all of which served as strong-points in advance of the main Allied line on top of the ridge.

A battle within a battle

The involvement of buildings, and especially those that served as temporary forts under siege, is a bonus for the archaeologist, as there is potential for a much wider set of archaeological features to exist. For instance, the buildings and other structures might have been modified to make them defendable, as was the case with the loopholes cut into the garden walls at Hougoumont. Then again at Hougoumont, there are the various features of which no obvious trace survives, such as the wood, orchard and formal garden, that is not to say however that they have not left behind a buried archaeological signature.
Fights over defended buildings, be they at the Alamo, Rorke’s Drift or Hougoumont, the latter of which has been described as a battle within a battle, can be very intense in nature, with many more men packed into small spaces than would be expected in the open field. In turn, this might result in the presence of more evidence for the fighting than in a field battle, which like Waterloo was stretched over a large swathe of the landscape. It has been estimated that the French attackers alone fired over 190,000 rounds during the fight for the chateau.

The presence of these archaeological remains therefore make Hougoumont an ideal candidate for those techniques associated with traditional archaeology, such as geophysics and excavation, as well as those now more often associated with the investigation of field battles, the most obvious of these being metal detector survey.

Seeing the Wood for the Trees

Unlike a mountain however, which can be climbed because it is there, a historic site should not be subject to the archaeologist’s trowel just because there is something to find. It is important that archaeology answers questions that will add to the sum of our knowledge.

At Hougoumont, some of these might be very straightforward, like was there a ditch as well as a hedge around the orchard, and if so does it contain evidence of being used as a defence, with men taking cover within it as they fire at the French attackers? Others might be more of a challenge, such as would it be possible to relocate the positions of the trees in the wood and from finds of musket balls and artillery shot between them gain some idea of the nature of the fighting in this previously confined environment?

There can be no doubt that the archaeology has great potential to shed new light on an event which despite many eyewitness accounts and history books is still in places cloaked in the fog of war.
Even something as simple as a small lead ball, an object that killed thousands of men at Waterloo, can tell us much. For example, we can distinguish a musket ball fired by a French soldier from that fired by one of the British or Allied soldiers at Hougoumont, as the calibre of the French musket was smaller than that of the Brown Bess, thus the musket balls are of different sizes. Some of the defenders in the wood were equipped with rifles, which thanks to the spin imparted on the ball by grooves in the barrel were more accurate, albeit slower firing, than the smooth-bore musket.

These too can be distinguished from other types of expended ammunition due to the grooves worn into the ball by the rifling. By recovering these objects from the soil in which they long ago became buried and carefully plotting their position a pattern of the ebb and flow of the fighting in the wood can theoretically be recreated.
Theory is one thing though, as any archaeologist will tell you, the reality might be quite another.